Prior to our trip, I’ve already researched and booked activities for us to do. Our trip was short, but then I wanted to make sure that it was worthwhile.

After retiring from the activities of our first day in Phuket, we were set for an early start. Our second day was assigned as the “adventure part” of our stay. We started off with our buffet breakfast (see post Breakfasts with Bae). Then we got ready and went down the lobby for our pick up.

The first item on the agenda was to visit the Monkey Temple. When we arrived, there were several other vans already in the venue and a cluster of camera-clad tourists all taking turns having their picture taken. But beyond that was the subject of the touristy fascination — the monkeys, and there were a lot of them. In the corner there were stalls with old Thai ladies chanting “100 Baht”, to which they were referring to the plastic bags of goodies to feed the monkeys with. 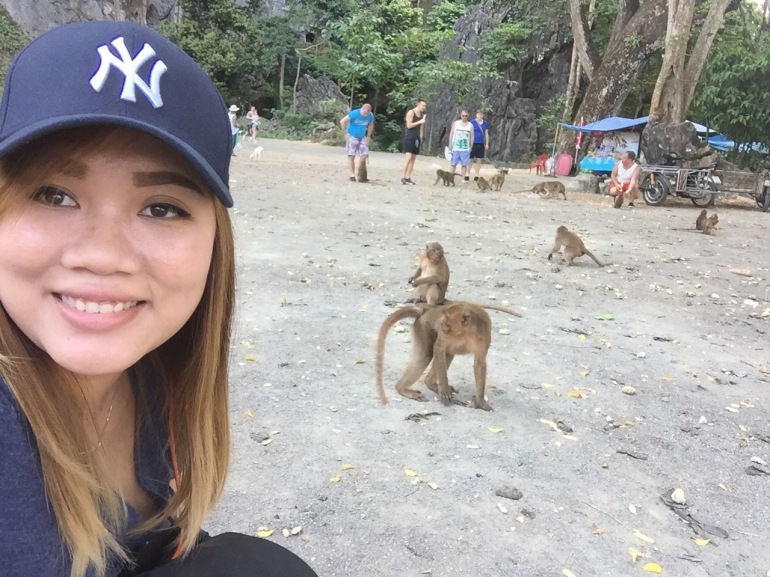 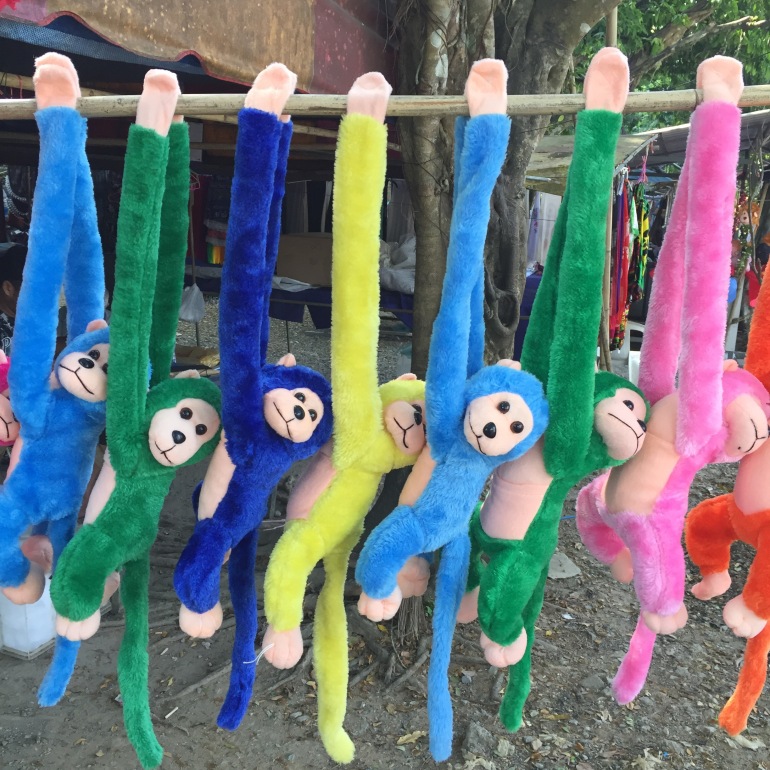 After taking turns feeding our new friends (some a bit greedier than others), we went around the area and took photos. The day was also really hot so we went for some popsicles to cool off.

Second destination for the day was to go rafting. The drive to the course was a long one, but the excitement of the activity made the time fly by. When we finally arrived, we were given a quick briefing of the procedures and then given our own little locked storage box to keep our belongings and valuables dry.

When they got us geared up with helmets and life jackets, we then hopped on a jeep to take us further down where the river(?) was. As expected, we weren’t alone. There were a couple of other groups present, but it wasn’t crowded. After the quick lesson and safety precautions, we were on our raft and ready to go. 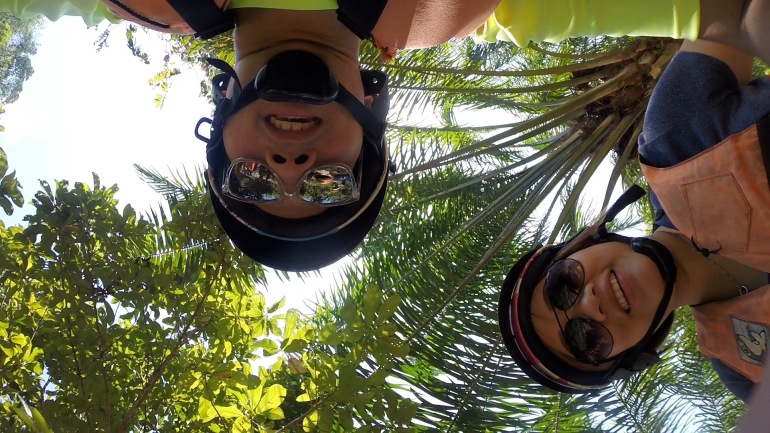 We were in the water for a good 30-45 minutes, and it was pretty awesome. You could feel the adrenaline at every turn and at every rock that was expertly avoided. When our leader would scream “bambee” (which we assumed meant bounce), we would definitely bambee. 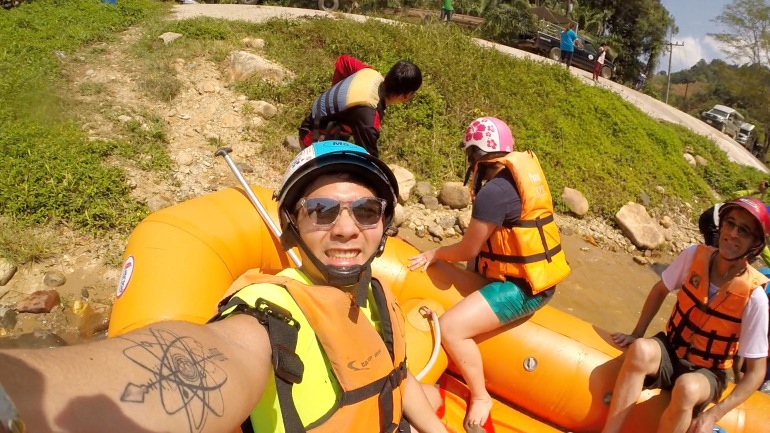 When we reached the end of the rafting course, one of the tour’s minions was already there with our storage box. She guided us to the jeep to bring us to our next stop — elephant trekking.

The elephant spot wasn’t too far away from where we rafted so it wasn’t that long of a drive. The fresh breeze also helped dry us off a little bit, which was nice. When we got there, an elephant and it’s carer was already there waiting for us.

You think you’d know how it would feel like to sit on top a giant mammal’s neck. Well, it’s pretty indescribable. I’d say it was one of the best experiences of my life, even more so that I got to share it with Joshua (💚💚💚). 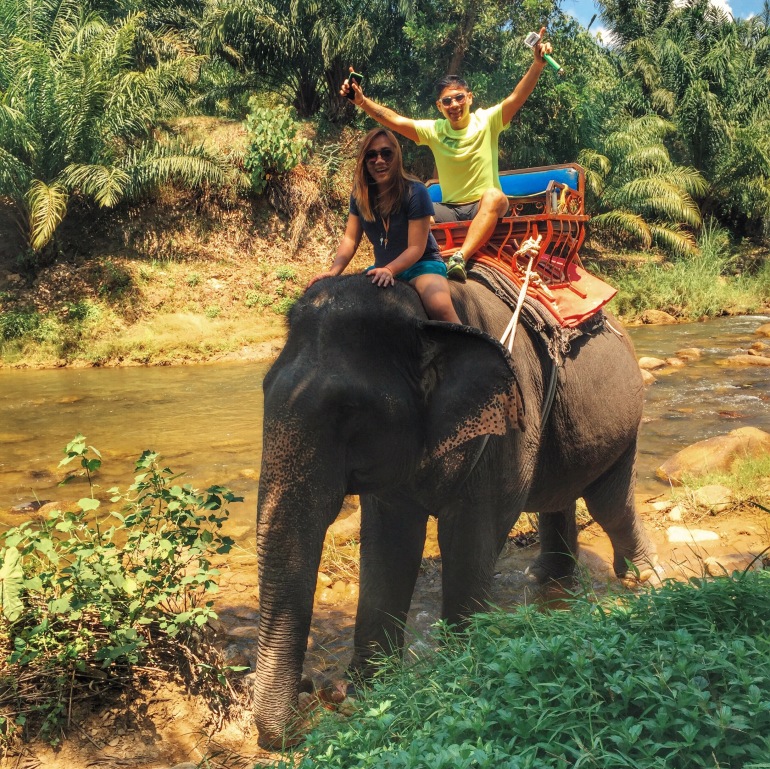 After our bucketlist-worthy elephant ride, we were famished! Thankfully, next on our schedule was lunch. We drove back to the rest spot where our Thai lunch was served. Considering that lunch was included with the package, it was really more than I was expecting. We had a table full of homey meals and both Joshua and I enjoyed it immensely (just look at that face). 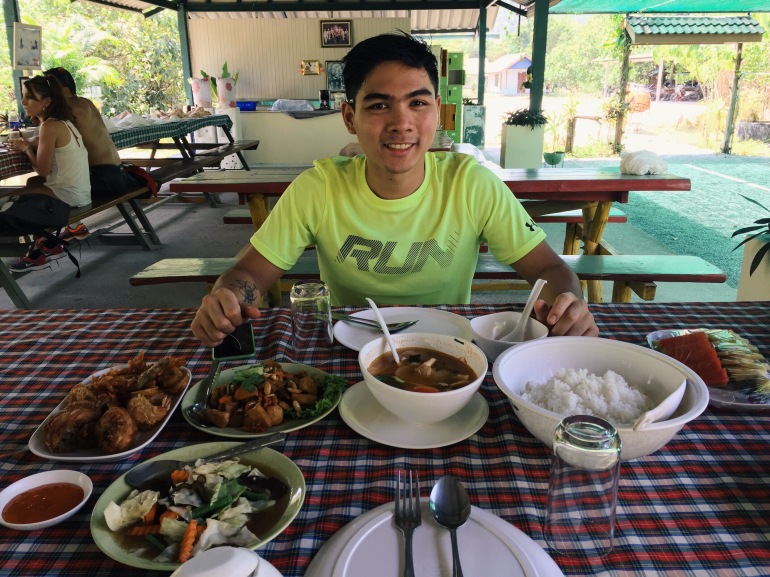 After our hearty meal, we had one stop left on our agenda. Our van brought us to a little secluded area where we trekked a little bit and reached a spring of sorts. There was a natural fish spa there, but apparently the fish didn’t like our feet too much. After a couple of nibbles they ignored us and went for the next pair of stinkers that dipped in the pond — literally leaving us hanging. 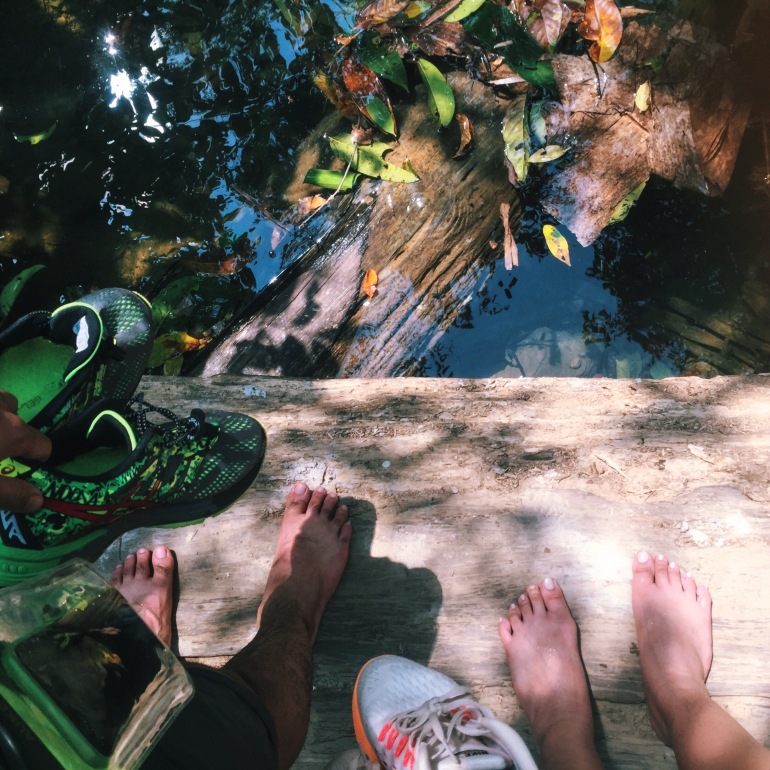 After roaming around for a bit, we all went back to the van and started the drive back to our resort. It was a long drive, and we were both pretty exhausted from the day’s activities. But we got back to our resort around 5:30 pm.

Given that we mostly slept the entire drive back, we felt a bit recharged and decided to go for a dip at the pool to cool down. There were several pools at Sea Pearl, but we strategically picked the one with the poolside bar.

We got a couple of drinks and we were just lounging away in the pool, enjoying random conversations and just being in each other’s company. Initially, the evening was supposed to be spent in town, looking for a nice restaurant to have dinner in. But we decided to stay in and order room service instead (and got a little crazy with the menu)

When we were done with our feast, we were skimming the TV hoping to find a good movie to pass the time with. But being a recently fed little piggy, I fell asleep in the middle our channel surfing. When I woke up it was already a little past midnight (making it our anniversary), so I jumped off the bed and gave Joshua my little anniversary present for him.

Since it was late and we had an early start the next day, we then both decided to call it a night. But just being there, together, was the perfect cap to a perfect day.

View all posts by thejeggs 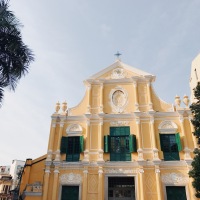 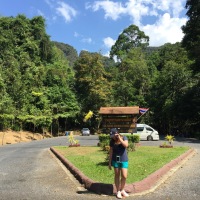 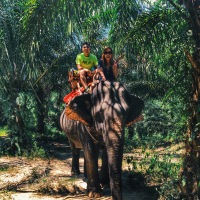